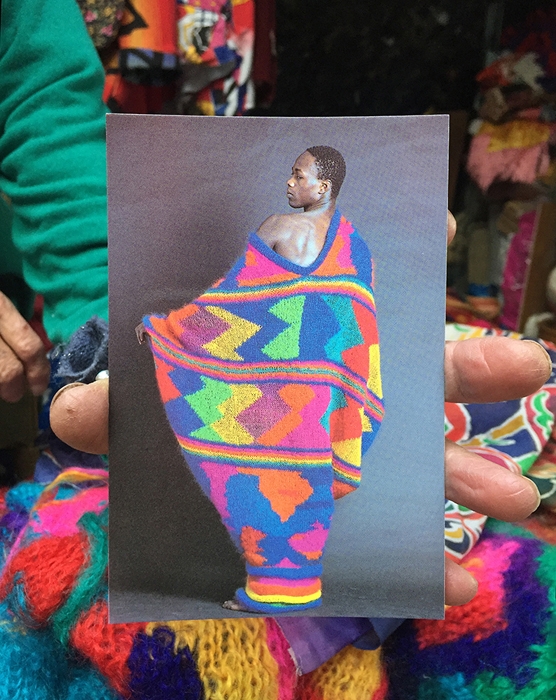 GRANDINE is pleased to present the first exhibition of Ann Churchill (1944, Oxford), showing works made over the last 50 years in various media. The exhibition celebrates Churchill’s singular style and generative art practice. Working with drawing, knitting, batik, beading and painting, Ann is an artist and maker whose work and life are entirely intertwined as she schools herself continually in the depths and possibilities of personal artistic practice. Originally inspired by automatic drawing she has explored different spiritual paths and crafts through an ongoing commitment to daily creative activity.

Drawing no hierarchy between the artworks, be they garments, drawings or beaded body adornments, Ann sees her practice as a meditative endeavour that supports her own inner spiritual journey. Her starting point has always been an attempt to access the unconscious and as such every work emerges with its own content, stemming from a fluid and open relationship to making.

Ann was an active participant in the Campaign for Nuclear Disarmament and the committee of 100, and during time at Greenham Common Women’s Peace Camp in the 1980s she was involved in the adornment of the fences and worked with other women to create banners and costumes for the peaceful protest outside the RAF base. In previous era’s and in other societies creation – such as sewing, object-making, singing or storytelling - was part of everyday life, Churchill notes that today these necessary outputs has been replaced by banal or commercial activities, shopping, baking and passive viewing have become the main creative outputs for our consumer age.

The intricate pen and ink drawings on show were made in the late 1960s and early 1970s whilst she brought up her first two children. At that time, she was committed to drawing every day, attempting to empty her mind before starting at the centre of the page, she asserts that these drawings emerged and found their own form. In the 1980s and 90s Ann turned to working with textiles making silk batiks and brightly coloured knitted mohair coats. In recent years she has returned to painting, initially in watercolour, and now as her sight has altered due to macular degeneration, acrylics and materials with the ability to produce bold colour and line. Also on show is a huge watercolour, made by stitching smaller paintings together and extending the imagery outwards into the expanded surface. Sometimes folded, sometimes rolling they are both scrolls, books and paintings, consciously denying the idea of a frame or stretcher, the image extends out to define its own possibilities and limits.

ANN CHURCHILL is a self-taught artist and maker brought up in London and living in Bath. After leaving school at the age of 15, Ann worked in Interior Design, then as a Stylist for Vogue. In 1968, when her first of three children was born, her focus moved from employment to creativity and spirituality. Subsequently she ran a Market stall for 20 years selling vintage textiles and clothing, trained as a psychotherapist, worked in kitchens, care settings, and the DWP to support herself and her family. The constant has been her creative output, producing banners for political rallies, models and costumes for performance, television and film, and continuing her daily drawing and painting practice. This is the first time her work has been shown in an exhibition context and has been brought together with her daughter, Elizabeth Neilson and artist Gaia Fugazza.

Ann’s exhibition is Grandine’s inaugural project and is conceived as takeover of one artist’s studio by another artist, making the presentation half way between an exhibition and a studio visit.